On Friday, November 14th, I got laid off from my day job. I don’t want to get into that too much here, but suffice to say I should’ve started looking for a new job before events forced the issue. (Though if anyone out there has any job leads by all means please get in touch with me!) Aside from the job search, to stay sane I’ve been making things, like a lot.

“Schoolgirl RPG” is the result of compacting the Maid RPG rules down about as far as they’ll go, resulting in a 7-page comedy RPG about Japanese schoolgirls. Apart from that it’s very open-ended, and largely an excuse to throw around random events and such. I’m in the process of working on a couple of small supplements for it too, namely “Extra Credit” (which adds a bunch more tables for various purposes) and “Otoko no Michi” (which adds rules for schoolboys, heavily inspired by Cromartie High).

Also a Maid RPG derivative, Retail Magic is a game about employees at a magic item shop in a fantasy world, and a weird blend of Slayers-style fantasy anime and cynical Western comedy about retail. The “Golden Friday Edition” is a fully playable basic version, without the bells and whistles I’m hoping to put into the final version. I’m hoping that it will succeed enough to get people interested in the game and thereby clearly justify full-on publishing a final version in print with art and everything. I had originally planned to release it on Black Friday, but my artist friend took an extra day making the cover art be amazing. (And by the way, although they’re a bit rough, here are the Employee Sheet and Boss Sheet.)

I also finished three new Five-Card Fictions decks, in addition to the original Miyuki Days deck. I was originally planning to stop at three decks total, but I hit on the idea of doing a “Karin Days” deck about Miyuki’s rival and sometimes girlfriend, which resulted in one of my best-written decks so far. I’ve started offering print-and-play PDFs for $1.99, and since the proofing process is done they’re also available in print on demand.

The Maid (for Dungeon World)

Probably the weirdest (in a cool way) thing to come out of this is that I made a Maid class for Dungeon World. It is very deliberately inspired by Maid RPG, and in fact has a move that involves random events, as well as stuff using Favor points. It was pretty fun to do, and got a decent response. The art, in case you’re wondering, is stock art (絵素材) that I bought from DLSite.com, one of the major Japanese doujinshi e-book type sites.

Inspired by a certain guy’s lists, I started a small side thing of making PDFs of d66 tables useful for generating various things for RPGs or other purposes. The first one was for Fantasy Names, providing names for human, elven, dwarven, and halfling characters suitable for D&D, Pathfinder, and other dungeon fantasy type games. I followed that with Super Names, Anime Stuff, Odds and Ends, Anime Stuff 2, Odds and Ends 2, and Titles. They haven’t been super-successful or anything, but they’ve sold a few here and there, and they were fun to do, and I’ve made enough that I wound up making my own product category for them. If this silliness goes on long enough I’ll probably make a book out of them. 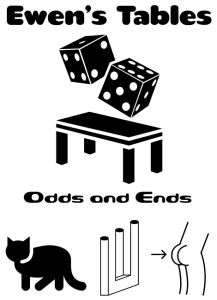 Anyway, that’s all for now. There’s all sorts of exciting stuff on the horizon, but I haven’t yet figured out a real path forward.