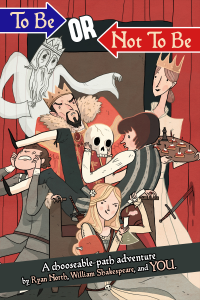 The notion of a book where the reader makes choices as they progress through a story seems to have first appeared (being described but not executed) in a Jorge Luis Borges story. The early branching path books were more educational tools (I remember one I had when I was young about the structure of atoms), but the best-known series is easily the Choose Your Own Adventure series. I’d always been interested in the idea of Choose Your Own Adventure books and other kinds of gamebooks, but at the same time I often wasn’t a fan of the subject matter they chose. The actual CYOA books, as well as things like Lone Wolf, can come off as a caricature of deadly old-school D&D, games that just hate the idea of your character being alive. The first gamebook I really and truly enjoyed was Ryan North’s To Be or Not To Be, a tongue in cheek take on the story of Hamlet. There are still plenty of ways for your character to die, but you can also do things like wind up with Hamlet’s father joining forces with other ghosts to fight an invasion of alien ghosts, so finding the many, many different endings is a major part of the fun rather than a source of frustration. Not unlike with playing party card games, it’s a lot easier to lose horribly and still have a great time. I’m still in the process of exploring what’s out there, but gamebooks have become a thing on Kindle and other ebook platforms, not to mention the success of Twine, which has helped a ton of people get their first taste of game design and become a major part of the Interactive Fiction scene. (There’s also the thing that Japanese visual novels are often basically COYA games with voice samples and character art.)

I’ve made one or two attempts at writing gamebooks in the past, but I completed one for the first time with Choose Your Own Homura, a very silly Madoka Magica mini-gamebook that will be a part of my friend C. Ellis‘ Madoka fanbook project. It is full of goofy references, including Charles Barkley and a couple of Wizard People Dear Reader nods. I wrote CYOH in Twine, and then converted it to a format suitable for dead tree printing afterwards. I haven’t explored other options too much, but Twine is pretty excellent, and it outputs an HTML file that you can play on virtually any device with a browser. Making the version for printing was kind of a pain, despite my having a decent command of Excel Sorcery (by which I mean VLOOKUP and a couple other useful formulas), so I’m hoping I can find some kind of automated solution for that before I launch into more ambitious gamebook projects.

I suspect it will get easier with practice, but to me the single biggest challenge of writing a gamebook is that (for me at least) it creates a particularly high degree of separation between the writer/designer’s point of view and that of the reader/player. The reader necessarily experiences a small fraction of the gamebook’s content on each playthrough, while the writer has to take a big-picture view of the overall decision tree’s many branches. I think it’s easier for me to get a sense of the way game mechanics will work because they’re something you have to apply in a variety of situations, whereas as a gamebook author you have already lost the feeling of making a choice for the first time and not knowing where it will take you. I haven’t yet tried working with anything besides simple branching choices, but with Twine and even with gamebooks there’s some really interesting possibilities with those kinds of things.

Tentatively my plan is that once the fanbook is sold out I’ll see about putting CYOH up for sale on Gumroad (I Want to be an Awesome Robot is available through there now too BTW), and to explore doing more gamebook thinks in the future, high on the list being “Octaviadventure,” which will probably be a part of Most of My Friends Are Potential Supervillains (the sequel to Awesome Robot). I certainly have no shortage of concepts/games that could make for a fun gamebook, and on top of that they could make interesting companion or promotional pieces for other games. A friend even suggested setting up a Choosatron at a convention booth to give people both a taste of your game’s general feel and a personalized souvenir to take home.

With this, Magic School Diary, and Five-Card Fictions I’m generally enjoying working with stuff that allows for solo play. It’s a very different kind of writing/design to be sure, but it also has the massive advantage of being able to test stuff (to some degree) by myself whenever I have time to spare.

3 thoughts on “Choose Your Own”