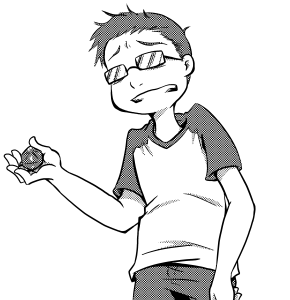 My name is Ewen Cluney. “Ewen” is pronounced like “Aaron” for reasons my parents have never adequately explained to me. “Yaruki Zero” is Japanese for “zero motivation,” and it’s meant as an ironic exhortation to myself to get things done. It was inspired by how I felt about being forced to put on a skit for a Japanese class. “Yaruki Zero Games” has become both the name of my games blog and my label for self-publishing RPGs and other stuff; my more professional stuff is mostly through Star Line Publishing, and occasionally other publishers I’ve worked for like Asmadi Games and Level 99 Games.

I’ve worked quite a bit as a localization editor and translator. I’ve done a bunch of work in the video game industry, and I also do translations and editing for Japanime Games. As a game designer I like to make games that are friendly and fun, and that no one else would’ve thought to make. Also, lots of anime stuff.