Vice President Nathan Wolf has launched a coup, bringing together traitorous soldiers, corporations, and individuals, as well as hired mercenaries to take control of our great nation. Now in America freedom is dead. Television is nothing but pro-Wolf propaganda, armed soldiers walk the streets, and the common people wonder what can be done. But all is not lost. The President and other staff members are ready to fight back, using their Executive Power Suits, armed to the teeth and ready to restore freedom to America!

Fullmetal President is an RPG of fast and furious mecha action. Roll some dice, narrate some explosions, and restore Freedom to America! The PDF includes the usual RPG stuff, plus a full description of the presidential succession (the First Children share a spot near the end of the list, but only if they finish their homework), ideas for scenes, and ideas for sequels if you want to play again once you’ve defeated Nathan Wolf, including Fullmetal President vs. Fullmetal Prime Minister and Fullmetal President vs. Zombie Cyborg Theodore Roosevelt.

To play you’ll need pencils, paper, and some six-sided dice. Rockin’, patriotic music is recommended but not required.

Melancholy Kaiju is a role-playing game where you and some friends make up stories about cute giant monsters living ordinary lives and being kind of sad.

It has six sample kaiju (The Amazing Colossal Office Lady, Beatzilla, Hole Punch Man, King Emo, MUKO, and Parfaitrah), rules an optional tables for making your own kaiju, rules for playing the game, and a table of ideas for scenes.

To play you’ll need a pack of playing cards, pencils and paper, and a few friends. 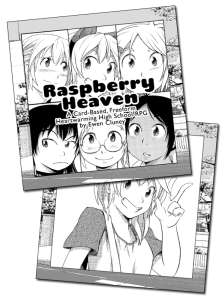 Raspberry Heaven is a heartwarming freeform RPG of everyday life as a high school girl. It draws inspiration from 4-panel slice of life manga like Azumanga Daioh and Hidamari Sketch. The game helps you play out a variety of scenes from everyday life with a set of premade characters. Get together with a few friends, and in 30 minutes or more you can experience your own funny and heartwarming schoolgirl stories.

The card version consists of a set of 23 6”x6” cards: 12 scene cards, 6 character cards, and 5 more cards with rules and other info. The PDF version has the same information in a convenient 8.5”x11” format for easy viewing and printing for online or in-person play, and includes some bonus play advice and other goodies. 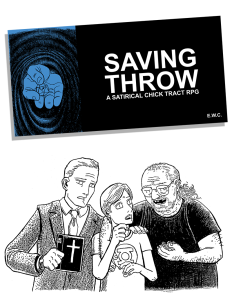 Saving Throw is a satirical RPG thing based on the works of Jack T. Chick, the prolific publisher of evangelical Christian tracts. This includes the infamous Dark Dungeons tract about D&D, but there are so many others, and DD is really just the tip of the iceberg.

This is a fast-playing game for 3+ players, intended to produce a (satirical) approximation of a Chick Tract in play. You will need a twenty-sided die and 7 tokens.