I’ve kind of been all over the place lately, and getting creatively obsessed with different things at different times. I’ve done three playtest sessions of Dragon World (it’s getting there), then got into working on my UFO Girl novel, then started having a creative crisis over Neko Machi, then we went through a bit of a shakeup at work, and now I have a cold. I’ve been meaning to record and post up a solo podcast for ages now, and thinking of trying to do them as kind of a regular thing. Somehow I haven’t been able to find the time to even get started, and with this cold it’s not gonna happen this weekend.

Kin-Yoobi Con
I had a booth at Kin-Yoobi Con, and sold Neko Machi mini-comics and buttons, plus Maid RPG. It taught me some interesting lessons about the anime crowd, most notably that when it comes to art those folks gravitate much more strongly to characters they already know. I’m wondering if there’s a way to use that kind of appeal for RPGs but on the level of fan art seen at the artists alley at an anime convention. 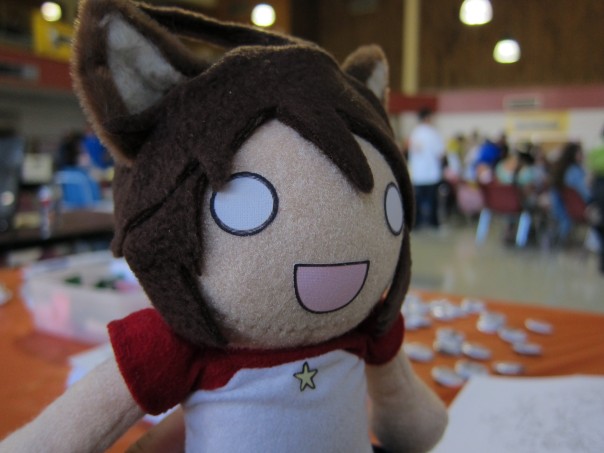 Mascot-tan
A while back I had an idea to do new games based on the Maid RPG rules, which I would call the M.A.I.D. (Maniacs’ Asymmetrical Interactive Delusion) Engine. I decided to start working on a new version of Mascot-tan that’s basically a Maid RPG hack. So far it’s sticking fairly close to the basic Maid RPG rules, the main difference being that (by default) the group rolls and agrees on one mascot theme (bands, fighter jets, game consoles, RPGs, whatever), rolls up random stuff for their characters, and then each player picks which specific thing their character is a mascots of. Also, I started writing up new tables for most everything from scratch. Funnily enough even for anime maids I’d end up changing some things if I were to write up a Special Qualities table today, on account of anime has generated new kinds of cliches since Maid RPG’s original publication in Japan.

There’s also something else cooking for Maid RPG. :3

Ambitions
I want to bring Magical Burst or Dragon World to fruition in the next 6 months or so. Lately I’ve had kind of a love-hate thing going with Magical Burst, so it’s been hard to muster up the desire to actually look at it, but I have gotten some more feedback. (Plus I’m not good at balancing creative projects. I tend to work on one thing to the exclusion of others.)

2 thoughts on “A Small Update”