It turns out a bunch of news about a bunch of really neat stuff popped up all at once, so here’s a post about three different things that I think are really awesome.

Madoka Magica
The broadcast of the last two episodes of Puella Magi Madoka Magica got delayed because of the earthquake and tsunami (the relief efforts are still ongoing, and our Maid RPG charity thing is still going on for a few more days by the way), but they’ve announced that those episodes will be airing at long last on April 21st. Not a few fans, myself included, are going to be relieved to finally see the conclusion of this exceptional series. 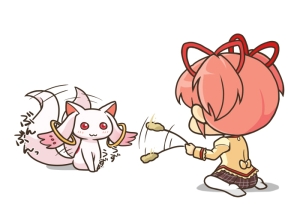 I feel like I ought to try to get the second draft of Magical Burst done by then, but I’m not sure if I can actually pull it off. Thanks to the recent thread on /tg/ and other people offering feedback I have a laundry list of great ideas to try to implement in the game, on top of all the stuff I already wanted to do myself. (Plus I’m significantly expanding the mutation table, which means lots of time consuming brainstorming and such.)

The game is about pilgrims, young people in a world with kind of an Avatar: The Last Airbender vibe, who get in trouble, help people, and have adventures through a fantastic world.