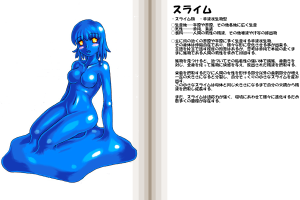 I now own a copy of Monsters! Monsters!. This is a game put out in 1976, designed by Ken St. Andre. It is essentially a variant of Tunnels & Trolls where you play as the monsters. (Here’s a rather detailed review). I had read about it in Heroic Worlds, and I got to play it at Origins ’94 (though I didn’t do well since I wasn’t getting into the monster mindset), but the new edition the GM spoke of never materialized (I can’t remember where exactly, but I read somewhere that the publisher couldn’t offer the designer selected enough money for him to justify doing the work). However, it turns out that a company called Outlaw Games offers reprints of old T&T and related game material, and even new stuff. The copy of M!M! I got (through Noble Knight Games) is a reprint in perfect condition, though it’s a pretty much unaltered reproduction of the 1976 version, which was apparently done on a typewriter.

The game itself is even simpler than old-school D&D. There are some other bits involved, but combat basically comes down to rolling your weapon dice and adding your Combat Adds (based on how much certain attributes exceed 12). It includes brief descriptions of 52 different monsters (set up so you can generate one randomly using playing cards). I definitely want to play this, but I think I’ll need to carefully limit the selection of monsters. For example, dragons have a strength multiplier of 25. That means that you roll 3d6x25 for a dragon’s Strength attribute, and a dragon with merely average Strength would be making combat rolls on 25d6+213 from Strength alone.

Anyway, it’s an exceedingly fast and loose game, though it does have some little touches of brilliance. My favorite thing is how XP is awarded. Since they PCs are monsters, they get XP for doing monstrous things. Defeating enemies who are more powerful is worth more XP, but abducting particularly beautiful victims (Charisma 17+) is worth a full 500 (which would get you halfway to Level 2).

If playing it works well, I’m going to look into getting some more T&T books to draw on (since M!M! kind of glosses over certain things, including treasure), and in particular some books, T&T or otherwise, with fantasy towns and cities for the monsters to rampage through.

Monsters & Mayhem
I have a certain knack for starting new projects even though I have more than enough unfinished ones staring me in the face. That’s how I wound up starting (if not very seriously so) on two new games. One of these is (tentatively) called “Monsters & Mayhem.” I like the idea of using the old alliteration with an amperand in the middle style name though. Somehow, as awesome of a premise as M!M! brings to the table, no one else has ever actually tried it as far as I know. This will thus be my take. A lot of my new design ideas are turning out to be this weird mix of traditional, Japanese, and indie design influences, and this one is no exception. To create a monster you combine two Keywords (e.g., Seductive+Demon=Succubus, but Seductive+Slime=Slime Maiden), which in turn affect your monster’s attributes, powers, and aspects. (Aspects tend to get you into trouble, say by compelling you to eat a town guard even though his friends will come after you). They “Keyword” approach comes from Beast Bind: New Testament, where you pick “Bloods” to make your supernatural creature.

Although I’m thinking I’ll include support for some other things, the core/default gameplay consists of the players’ band of monsters going into a (demi)human town seeking fame and fortune. In essence, for them towns replace dungeons as the dangerous places to venture into. I’m stealing the awesome idea from the “Maidenrangers” Maid RPG scenario of using playing cards to create a board/map for the PCs to move around. Different cards represent different random encounters, though of course the GM can pick out cards and generally set things up however he or she likes.

Slime Story
I had the idea for this setting ages ago, and I wrote a short story for it a while back. Now I’ve finally gotten a good start on the RPG version I wanted to make. It takes place in a world where portals suddenly started dropping cute monsters (like something out of a Korean MMO) into an ordinary contemporary world. In the game you play teenagers who hunt monsters as a hobby–and for spending money. To create a character you pick a Class (which decides how your character hunts monsters) and a Clique (which determines how he or she fits into society). Fighting monsters is a fairly simple hack-and-slash affair, but each session players create “Quests” for their characters. These can range from simple monster-hunting goals (earn $300, kill a salamander, etc.) to tricky social goals (ask Rita out on a date, convince Alex to let me go hunting with him), but they have to be things that you can do around an outing to hunt monsters (try to find the right moment to ask Rita out while you’re looking for more monsters). It’s very strange trying to come up with a bunch of monsters while making sure that none of them are even remotely sentient.

For both games I’m leaning towards using d20s, partly for what they’re referencing, and partly because isocahedrons don’t get much love outside of D&D.