I figure we’re a bit overdue for an update on what’s going on with Golden Sky Stories, so here goes. Right now the plan is to launch the GSS Kickstarter on the heels of Tenra Bansho Zero‘s Kickstarter. Assuming Andy and Luke keep on schedule, that means we should be launching the GSS Kickstarter around the end of June. That means we have a couple more months, and we’ll be using that time to get everything in order so that when we do our own Kickstarter we’ll be that much more able to get everything out to everyone without undue delay.

Slow and Steady Does the Layout
The graphic designer for Golden Sky Stories is none other than Clay Gardner. He is the designer of OVA: Open Versatile Anime, and has done graphic design work for a huge variety of projects, including several games from Minion Games. The original Japanese version of Golden Sky Stories was already a feast for the eyes, but Clay is using his graphic design skills to add another layer of polish all the same. He recently put up a blog post where he shows off what he’s doing with the power descriptions for rabbit henge. Clay’s currently about halfway done with the layout, and I’m really liking how it’s looking so far. 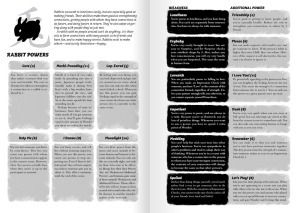 Something Fishy
A while ago I hit on the idea of making a new, original character type for GSS as a Kickstarter reward. Ben Lehman (who you may know from games like Polaris and Bliss Stage) stepped up and offered to try his hand. About a day later he sent me his first draft of a writeup for fish henge. We’ll be doing some refinements between now and the Kickstarter of course, but Ben’s writeup is already wonderfully whimsical and mythical. It’s a bit of an “advanced” character type that’ll be a little tricky to play. 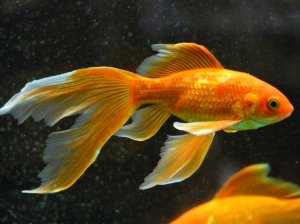 I’ve also been working on a writeup for “pony henge,” which are indeed partly inspired by My Little Pony: Friendship Is Magic, albeit with plenty of elements inspired by reading up on horses on Wikipedia. Looking up idioms/cliches about an animal is a great way to come up with powers for henge by the way. I’m still working out what exactly to do with these new writeups, but at present I’m thinking of having the fish henge be a Kickstarter exclusive and having the pony henge be a freebie.