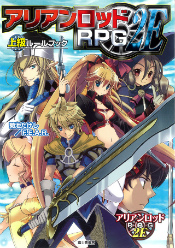 I wound up getting a copy of the Advanced Rulebook (上級ルールブック) for Arianrhod 2nd Edition, F.E.A.R.’s dungeon fantasy RPG with an anime/JRPG style. The book includes advanced classes (that characters can take at level 10), prestige classes, new skills for the base classes, items, guild skills, monsters, traps, dungeon objects, and optional rules. The thing in it that I found the most interesting is what the designers call the Focus System (FS for short). The Focus System is something a lot like Skill Challenges in D&D4E, but better in pretty much every way. There’s even an FS Check Management Sheet, which isn’t quite as insane as it might look. It has spaces for three FS checks, and F.E.A.R. is just really big on making sheets for things.

An FS check goes in rounds, and one of the neat things about it is that you can have an FS check going at the same time as combat. Making a check for the FS uses your main action, so you have to choose between that and attacking. During the FS check a character can make Progress Checks or Assistance Checks. A Progress Check is a check[1] on the attribute (or other appropriate check) determined by the FS check’s specifications, and you gain or lose Progress Points according to your margin of success, anywhere from -2 to +4 (with a special bonus of +1d6 plus 1 per die that rolled a 6 on a Critical), and your ultimate goal is to accumulate enough Progress Points to complete the FS check. However, an FS check has a limit on how many characters can make Progress Checks per round (2-4 in the examples), so other characters can make Assistance Checks during the initiative phase, and if successful they give a +2 bonus to another character. A typical FS check needs 10 to 20 Progress Points to proceed (10 in most of the examples), but the PCs have a limited number of rounds to pull it off (in the included examples 3-5 rounds). When you design an FS check, you take the preferred number of participants times the number of rounds to determine the Progress Point objective.

Events are the other major thing that make an FS check more interesting. These trigger based on how many Progress Points the PCs have gained, usually around one event per 3 Progress Points (paced so you get one every 1-2 rounds). Events can change what stat you need to make a check with, alter the difficulty you have to beat, or also affect the FC check’s end conditions (giving you more or fewer rounds to complete it say). The book has 5 full writeups of example FC checks, and one of these is for disarming a particularly complex trap. It starts with Trap Removal checks (a special Thief skill, based on Dexterity), then the difficulty drops as you start to understand the trap, then thwarting a mechanism requires Strength checks, and finally at the end you’re left with the choice of the red wire or blue wire, and you need to make a Luck check. If the PCs get enough Progress Points at once to trigger multiple events, you take the most recent check requirements and retain things like modifiers to difficulty numbers from intermediate events.

If the PCs get enough Progress Points in time, they’ll succeed and get an XP reward at the end of the game session. The text also notes that you can have competitive FS checks basically by having two groups doing the same FS check in parallel and competing to be the first to get the required number of Progress Points.

That’s the basics in a nutshell. I find it pretty fascinating both as a game mechanic and for the simple fact that I don’t think I’ve ever seen this kind of thing from a Japanese TRPG before. I don’t know whether D&D4e played into its design (the Arianrhod 2E Advanced Rulebook did come out in 2011, and 4e is available in Japanese), but conflict resolution mechanics are about as nonexistent as GM-less RPGs there. Needless to say I want to use some ideas from the Focus System in Slime Quest’s Challenge system, though I think my take on it will have some elements of the Mouse Guard RPG as well. There’s a lot of interesting things in Japanese TRPG design, but sometimes there’s a certain rigidity at least in the rules as written, which shows here in how Progress Checks involve predetermined attributes and strategies. I’d much rather just ask the players how they’re tackling the problem and have that then play into the rules. On the other hand it’s substantially more developed than D&D4e’s Skill Challenges, and if I was going to run a 4e game I’d put together a houserule for improved SCs drawing from the FS check rules.

[1]In Arianrhod you make a basic check by rolling 2d6 and adding your attribute’s modifier (which is 1/3 of the base attribute number, and typically in the low single digits to start with). Snake eyes is a Fumble, and box cars is a Critical. The game doesn’t have “skills” in the Western RPG sense, but certain classes can have abilities that let them make special kinds of checks such as trap-finding or alchemy.

With so many TRPG books to go through, I’ve decided to start posting about the various books I’ve got as I go along. First up is Doko ni Demo Aru Fushigi. This is a 50-page doujinshi produced as a collaboration between Tsugihagi Honbo and Majo no Kai. Tsugihagi is Ryo Kamiya’s circle, and responsible for Yuuyake Koyake. Majo no Kai, headed up by “South,” published a print edition of Witch Quest, a free TRPG available as text files. Witch Quest and Yuuyake Koyake are both heart-warming “everyday magic” games, so it was natural for the two circles to collaborate on something. However, the notion of doing so came right when Kamiya was hard at work on Mononoke Koyake, so if they were going to do such a project, it needed to be one that wouldn’t place undue burden on either party. This book is the result. They met online, played a session of each of their games, and had a lengthy dialogue about everyday magic in general, and the book has a transcript of the discussion, sandwiched between two replays. It’s not the most impressive RPG book out there, but for me it was definitely worth the 500 yen.
END_OF_DOCUMENT_TOKEN_TO_BE_REPLACED