Spooktacular is finally out! Or at least the initial PDF is up for sale on DriveThruRPG. I still need to put together the POD versions (UPDATE: It’s now available in print through Amazon!), and I also want to make a set of reference cards for equipment and such. It’s been something like 18 months since I started on it, and while I would’ve liked to have it out sooner, James Workman‘s art turned out great, and the extra time let me polish and improve the text, so I’m pretty happy with the end result. 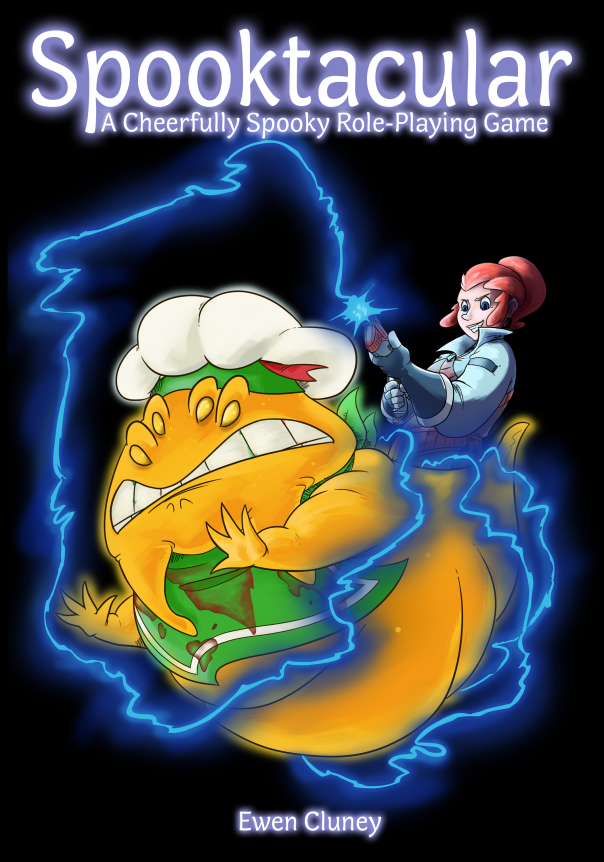 I wrote a blog post about it back in August of 2016 (wow), but Spooktacular is basically an updated retroclone of the West End Games Ghostbusters RPG, which was a forgotten gem of 1980s RPG design that among other things served as the starting point for the D6 System that powered the beloved WEG Star Wars RPG. Much like the many OSR retroclones of D&D, I’m hoping that with Spooktacular I can help preserve a pretty amazing game that was way ahead of its time, a game that created or was an early adopter for several innovations that we largely take for granted today. (Like, it legitimately appears to be the first RPG ever to use a dice pool mechanic.)

I made some relatively small changes to the rules, but for backwards compatibility the main thing you need to know is that 1 point of Ectopresence in Ghostbusters equals 2 points of Presence in Spooktacular, owing to the slightly different damage system.

I’m also working on some supplemental material for Spooktacular. I was originally planning to just make one big book called “Spookstravaganza,” but I have enough ideas that it seems like it’ll make more sense to do 2-3 smaller ones.

Ghostbusters is kind of a weird franchise in that its core it basically consists of 2 movies, but it has kind of a lot of non-canonical secondary stuff. There was The Real Ghostbusters cartoon in the 80s (with tie-in comics), Extreme Ghostbusters, a bunch of video games (most notably the 2003 Ghostbusters: The Video Game, which brought the original actors back to do voices, and for which Dan Aykroyd and Harold Ramis did a lot of the writing), the 2016 reboot movie, and the IDW comics series (which has established its own universe that’s had a series of crossovers with other titles). There have also been some surprisingly good tie-in books recently, notably Ghosts From Our Past: Both Figuratively and Literally (based on the in-universe book from the 2016 movie), Tobin’s Spirit Guide, and Ectomobile (which is framed as an in-universe guide to Ectomobiles and other gear for Ghostbusters International franchisees).

One of the major challenges of Ghostbusters is that the premise includes some concepts that should have mind-bendingly huge implications for that fictional world. The Ghostbusters have scientifically demonstrated the reality of ghosts–which at least strongly implies that life after death is a thing in some form–and technology to detect and capture them. Ghostbusters II essentially dealt with this by trying to sidestep the question entirely, declaring that despite the marshmallow kaiju smashing up New York, most everyone had decided that the Ghostbusters were full of shit, including the courts, and they had to essentially claw their way back to restarting their business. Patrick Willems did an interesting video about the idea that Ghostbusters is “a movie about nothing,” which I think nicely encapsulates how the original Ghostbusters somehow manages to be a more or less perfect comedy movie despite having no character arcs or themes per se, instead presenting a procedural plot that periodically bends towards a number of themes but doesn’t quite develop any of them. The 2016 movie in contrast was written with more modern storytelling sensibilities, making skepticism of the supernatural and social acceptance and friendship into important themes. It doesn’t have the perfect alchemy of on-screen chemistry, a new and irresistible concept, an all-around fantastic soundtrack, cutting-edge special effects, etc. that made the original film so incredible, but the use of clearer storytelling devices makes it a much better film than it could’ve easily become.

For an RPG, the good thing about all of that is that Ghostbusters doesn’t create too many expectations beyond using dodgy gadgets to zap ghosts. In Spooktacular I’ve tried to find a happy medium between charting out my own approach to the premise and leaving it open for the people playing to decide on their own. My ideal take on a Spooktacular story is kind of like a Graham Lineham comedy with busting ghosts, but maybe yours is different, which would be totally cool.

Between the source material, real-life reports of hauntings, and just exploring possibilities there’s kind of an enormous amount of stuff I can do for Spooktacular. I’m working on some new archetypes, new gear, options for different types of containment grids, a zillion different ghosts, paranormal organizations, a selection of human NPCs, dangerous paratechnology for NPCs villains to use, and monsters other than ghosts to spice things up now and then. I never really got the hang of writing up adventure scenarios, but Spooktacular is both a game that lends itself to them (unlike some of my other games that run more on GMing procedures) and a simple enough game that I already know the rules inside and out, so I’m seriously thinking of making the attempt.

I’ve been running a Doctor Who RPG campaign for some friends, and while the rules that Cubicle 7 put together for it are pretty good and the campaign has been a lot of fun, I kept thinking that something derived from the rules of Spooktacular could do pretty much the same job more simply. When I brainstormed ideas for different settings and genres to do with the system, I quickly wound up with an impractically long list of possibilities. While I want to do a bit more with the system myself, the sheer potential I see combined with the fact that it’s so much standing on the shoulders of giants led me to the idea of releasing it as an open system.  I arrived at the name “Sixtacular” for the system (owing to its familial relation to the D6 System), and I’m planning to release an SRD under the Open Game License so people can go to town making games. It may not amount to anything or there may be an annoying prevalence of games with “-tacular” in the title, but regardless it’ll be there for you to play with. The 1.0 version of the SRD will be a pretty basic thing with the Spooktacular core rules minus the tables and the ghost-specific parts, but I’m hoping that through myself and others developing the system further it’ll change and grow over time.

UPDATE: I added the SRD in PDF and docx formats to the Spooktacular/Sixtacular page:

I’m planning for my next Sixtacular game after Spooktacular to be Zaptacular: Mad Science Adventures. Rick & Morty is an important influence, but it basically mashes up elements of all my favorite comedy sci-fi stuff–Red Dwarf, Futurama, The Hitchhiker’s Guide to the Galaxy, The Lost Skeleton of Cadavra, and many, many more–with a cynical modern-day Earth as the default setting (but options for time-hopping like Doctor Who, being lost in deep space like in Red Dwarf, and so on). There’s kind of a ridiculous amount of media that I really love that fits squarely into Zaptacular’s wheelhouse, as well as a bunch of my own random creations that work well with it, so I expect to have a lot of stuff to stick into the game’s multiversal setting.

3 thoughts on “Spooktacular (and Sixtacular)”