I haven’t written about it all that much here, but lately I’ve been working pretty intently on Kagegami High. Of my self-published games, Schoolgirl RPG is the most spontaneous and also one of the most successful. I ended up making quite a bit of material for it, put together a Complete Edition (with a POD version available), and then giving it a rest. When I decided to come back to the game, I had the idea to create a book that presents a premade setting, a high school with explanations of places, students, teachers, etc. I’d barely gotten started on brainstorming for that when the idea for Kagegami High took over. 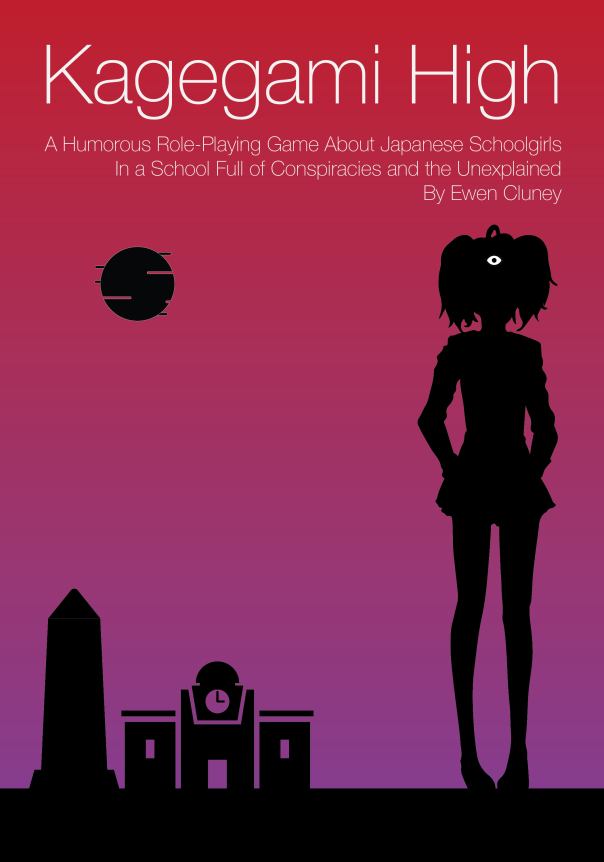 Needless to say, Welcome to Night Vale was a major source of inspiration, though not the only one by a long shot. Joseph Fink has described Night Vale as a place where every conspiracy is true, and while I’m definitely a skeptic myself, I find conspiracy theories, ufology, cryptozoology, and so forth fascinating for what they say about people. I also evidently have a different experience of conspiracy theories than the creators of Night Vale, because the likes of HAARP and MKULTRA loom much larger in my awareness of such things. Japan also has its own peculiarly Japanese urban legends, cryptids, and conspiracy theories, whether it’s Hanako the toilet ghost or the notion that the Emperor is not a figurehead but instead the leader of Japan’s true shadow government. Kagegami High is located on the small island of Kageshima, and while it has adapted to modern standards in most ways, it also retains strange practices from the dawn of Japanese history, starting with the fact that new students are chosen by the massive black stone inside the Kage-no-Mikoto Shrine.

Since it builds off of the rules of Schoolgirl RPG (and thus is based on the rules of Maid RPG), Kagegami High charts its own style for the actual action that happens at the table, with characters dealing with all manner of frantic strangeness without the tendency for people to die or meet even stranger fates as in Night Vale. Instead, your heroines will sometimes suffer strange transformations or distortions in time and such, but find themselves to be worryingly durable when all is said and done. The major new things in the actual game are more in terms of presentation than new mechanics per se. There are Principles, which are ultimately a kind of play advice, and there are GM Moves, which are a way to educate the GM on formal and informal procedures that already exist in the game, even if some have always been tacit in the past.

d66 tables have become ever more prominent in my creative works, including Ewen’s Tables, which turned them into a kind of self-expression that could be untethered from any specific context. Kagegami High is a setting expressed primarily in the form of tables, albeit with many of the tables being setting elements with itemized lists of 18 or 36 things so that the option to roll one randomly exists. Still, in addition to the usual character creation and random event tables, the book is going to have tables for just about anything you could want to come up with on the Kagegami High campus, from morning announcements to cafeteria meals to school assignments, all suffused with the dark, surreal, silly atmosphere of the game.

The style of humor in Kagegami High is a lot like the humor in I Want to be an Awesome Robot, delivering nonsense with unwarranted confidence and the occasional dollop of sincerity.

Tonight at 11:59 p.m. and 59 seconds there will be a leap second to adjust for irregularities in the earth’s rotation. All students will be expected to jump in unison at that time.

Shadow Video, a video rental store, just opened for business near the quad. We have no opinion on whether or not you should go there, but we do know that they have only two types of VHS tapes available. One half of the store is tapes of 1986’s Howard the Duck, and the other half is VHS cases that contain soft, fresh earth and wriggling insects. The Student Council’s Secret Police said they are hoping that the store will mysteriously vanish by lunch time. The proprietor merely stared at us with his glassy, blank eyes and moaned, “No one laughs at a master of Quack Fu.”

The Student Council is currently debating whether to fluoridate the tap water in the school. At least we are led to assume that they are debating it because of the occasional earthquakes and the taker of fluoride that arrived at port yesterday. If you have an opinion on fluoridation, say it into your cell phone (it doesn’t even have to be on) and the Student Council’s Secret Police will pay you a visit and make you drink a glass of perfectly ordinary water.

The much-hated Spoilers Club wants you to know that in next week’s Game of Thrones the following characters will die: Arya Stark, Jaime Lannister, Thorin Oakenshield, Neville Longbottom, Jeffrey “The Dude” Lebowski, and Akiko Kimura from Class 1-B. George R.R. Martin must be stopped.