Fullmetal President
The game is coming along nicely. I did some important revisions based on the first playtest and some feedback, and I’m going to be doing some more playtesting soon. I also included a d66 table of offices in order of presidential succession, which got interesting because there are only about 18 positions in the real-life line of succession. Also we hit on the idea of presidential pets being a possible PC, hence for the upcoming playtest one of my friends sent me his writeup for the White House Dog as a Fullmetal President character:

Office: White House Dog
Name: Dogg McCool (named by the First Daughters)
Age: 5
Gender: Male
Race: Shih-Tzu/Greyhound mix
Home State: Oregon
Policies: Sniff as many butts and crotches as possible. Eat anything on the ground or floor. Catch a car. (Not a cat, he likes cats. A Car.)

Raspberry Heaven
The new Restless-inspired card-based version of Raspberry Heaven worked really well in the first playtest, but it definitely needs some more playtesting, plus I’m waiting on artwork of the characters. It’s kind of a quirky, artsy game, so it’s going to mainly be a Patreon and POD release (since it was made for the oddball 6″x6″ format that DriveThru offers), though I already have some notes for a “Holiday Special” expansion, and an idea for a “Teacher’s Side” version inspired by the (obscure but kind awesome) manga S.S. Astro.

Mascot-tan
A while ago I started on a new version of Mascot-tan that ran on the rules of Maid RPG. The major issue I found is that random chargen doesn’t work well with gijinka characters, so I went back and reworked the character creation rules to be non-random, which makes them a bit more like the old version of Mascot-tan. The text is just about done, so the game will probably be going out once the colored versions of the artwork are ready. 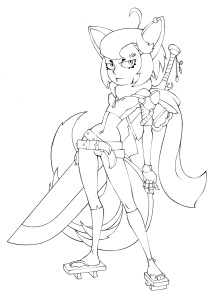 Fighting Fighters Coliseum
This is an idea I had a while ago, which I got inspired to work on again due to getting a copy of 7-Card Slugfest. FFC is a descendant of Channel A, where you use words on card to put together names of finishing moves. The game also has a set of 30 (so far) character cards. Each player has one, in which case it provides them with a small special ability, and they double as boss characters, in which case they have something that triggers when the group is fighting them. There’s also “Priority Tokens,” which you can grab once your move is put together to get a bonus for finishing quickly. Votes come in the form of “Hits,” and special abilities and Priority Tokens modify the number of Hits you get, giving the game a bit more of a mechanical side. I have the first prototype made, so we’ll see how (if) these things actually work in playtesting.

Magical Fury
The major new development with Magical Fury is that I finished and released the Magical Fury Companion, a 15-page PDF of new game material, including new moves, character options, and foes. It includes some of the stuff I’ve been developing for Magical Burst, reimagined for Magical Fury’s alternate take on things.

Ewen’s Tables
The fairly ridiculous Ewen’s Tables project is nearing the end of its first chapter. The plan is to put together a total of 36 PDFs of d66 tables, and then make a compilation book available in POD and PDF (probably a bit over 200 pages), with some bonus tables and such thrown in for the heck of it.

To go with it I made the “d66 Deck,” a 72-card deck that gives the probability spread of 2d6 twice over, with 2d6 and d66 results, plus dice icons and “glyphs” to provide inspiration. They’re really nice for generating results from d66 tables, and I’m hoping to design some card games to play with them as well.

Magical Burst
I’ve been busy with other stuff, so not a lot has changed since I last posted about Magical Burst. I’m liking how it’s coming along in any case, and the core rules are coming together nicely, at least on paper.

I’ve been playing Persona 3 quite a bit lately, and I’m thinking that the rules of Magical Burst would be a great starting point for building a serial numbers filed off Persona RPG, though I need to finish MB and Persona 4 before I seriously think about that.

2 thoughts on “Updates on Assorted Projects”