Time for some updates on various projects again!

Dragon World wound up being the project that I settled on to concentrate on. Of my too-many RPG projects it’s the one that’s probably the closest to fruition, the one that’s been the smoothest and most fun in playtesting. It also doesn’t hurt that I’m generally in the mood to take the piss out of the fantasy genre, which seems to need that more than ever. I’ve made some small refinements to the rules, but a lot of the work I’ve been doing has been working on filling out the text, refining play advice, improving the DM moves, and adding setting elements. I also added the Shiny Paladin to the core classes, and I’ve been drawing on Inverse World for ideas on how to better express a setting.

Related to it, I’ve been reading The Humor Code, a book written by a journalist following a psychologist trying to build and test a theoretical framework to explain humor. I have a long blog post in the works about it, but the core concept of humor that I was groping towards was that the core of it is things that thwart (perceived) expectations. A pun thwarts our expectations of what a word means, a leader being a buffoon may be unsurprising, but it plays with perceived expectations, that kind of thing. This isn’t so different from the psychologist’s “benign violation theory,” which posits that humor comes from violations that turn out to be benign in nature, and I think helps explain why some things can take the form of a joke but not be funny. I’m pretty sure there can’t be a magic bullet for humor, but I think there’s a lot of potential in a humor RPG made with an awareness of a theoretical framework of some kind.

Oh, and when I mentioned that for the eventual Dragon World Kickstarter I want to have “& World” be a bonus thing, I got like three people expressing interest in making it. I need to get Dragon World ready first, but & World is definitely happening. I have no idea what it will actually be, but still. Also I kinda want the first supplement full of new classes to be called “Dragon World Class Collection I: The Codex of Gimmicky Weirdos.”

A while ago I picked up the book Second Person from the MIT Press, and more recently I ended up opening it up again after letting it sit on the shelf for a long time. One thing mentioned in it that I found especially fascinating was Life in the Garden, a sort of story toy where you have a set of cards with story snippets, and you shuffle them and draw 5, which you then read in order to form a story. Unfortunately it’s long out of print and used copies go for $120 or more, so I got inspired to try making my own similar games. I wound up starting on a project I call “Five-Card Fictions,” which will be a series of such games. The first one, which is now at the “fancy prototype” phase, is called Miyuki Days, and is a thing about a Japanese schoolgirl that is variously mundane, surreal, and yuri. I used icons from The Noun Project to add more of a visual element, and pixel art I commissioned a while back for the cover. I also added some suggestions for alternate ways to use the cards, both single- and multi-player. 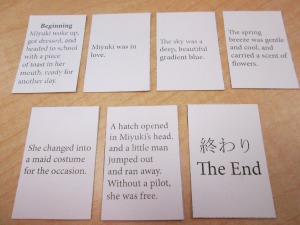 After that I’m planning to do two more. The second is going to be Thralls of the Red God, a sword and sorcery tale. For the third I’m hoping to do something in the style of Jorge Luis Borges, but I’m finding it’s been long enough since I last read Borges that I need to get reacquainted with his work to really pull it off. (And after the third one I’ll stop and not run it totally into the ground.) Miyuki Days will be up on DriveThruCards before too long, while the others are going to take some time to get sorted out.

One of the weird little things in I Want to be an Awesome Robot (a book pretty much made of weird little things) is “The Bird Game,” a sort of self-parody in that it’s a mini Channel A style game where instead of anime you make birds. I decided to make a POD “Deluxe Edition,” which adds new cards, in particular “Question Cards” that save the Bird Czar the trouble of coming up with questions. That step had been taking forever, but somehow or other with some googling I managed to get it finished fairly quickly over the weekend. The game purposely has a little bit of a cheap look (no Clay Gardner graphic design brilliance for this one), using public domain photos of birds and such. It’s very silly, and it will also be up on DriveThruCards before too long. 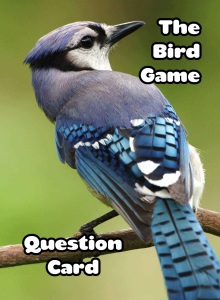 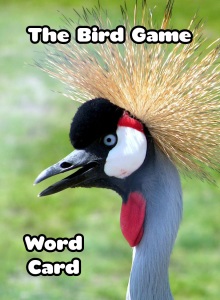