Time for an update on where I’m at with card game projects, notably i.hate.everyone and a new magical girl battle card game. (Did that get your attention?)

A little while back Clay did the graphic design for fancy i.hate.everyone cards, and I got a prototype made through DriveThruCards. Daniel Solis’ card design tutorial covers using the Data Merge feature in InDesign to automatically slot text into a card template, which made the whole thing much easier and generally more bearable to do, though I find InDesign bizarre and infuriating for all sorts of things. (It’s really, really weird to me that Adobe apparently doesn’t think anyone would want to import a Photoshop file into InDesign without completely flattening it.) Anyway, the results were pretty excellent all around,[1] and i.h.e is becoming the time-wasting card game of choice with me and my friends. I had upped the number of cards with special effects to about 1 in 4, and all the shenanigans with drawing, discarding, and trading cards were a lot of fun. I’m also very happy with the quality of printing from DTC, though a game with 380 cards is less than optimum both in terms of pricing and the fact that they don’t currently sell boxes that hold that many (though when I corresponded with Brian via email he said that’s something they’re working on.) Anyway, here’s a look at the cards! 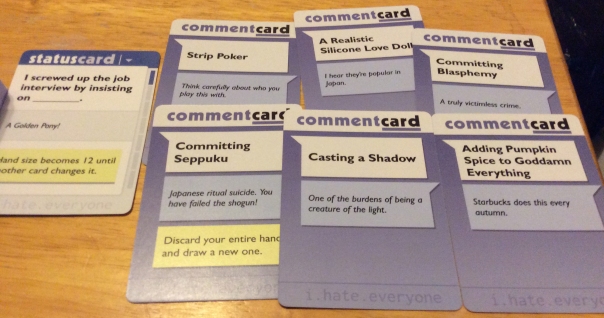 Right now the plan is to tweak things a little bit, and then start sales of both i.hate.everyone and i.hate.fandom through DriveThruCards. I’ve also already started on the first expansion, i.hate.bronies, which is indeed My Little Pony themed and weird and terrible and I already commissioned a pony mascot for it named Flippy. 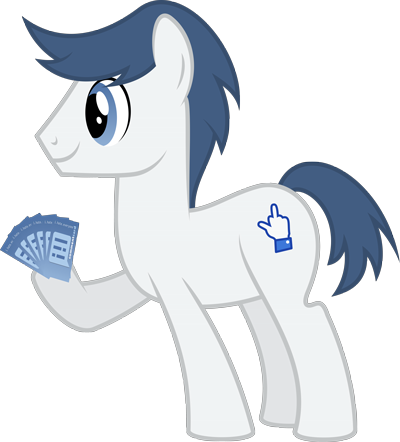 Anyway, setting that aside, playing a bunch of Hearthstone (Blizzard’s new freemium online Warcraft tie-in CCG) put the idea of making some kind of battle card game thing into my head. Which I think is a good thing because I really should branch out beyond goofy stuff with words on cards. I specifically want to do something non-collectible (not that a CCG would be practical anyway) partly because losing solely because the opponent has more time and money and thus just inherently better cards is my least favorite part of playing Hearthstone. (And I really don’t remember it being that pronounced when I was playing Magic in high school.) Looking for an actual theme, I hit on the idea of doing a game about magical girls fighting, and thus a Magical Burst tie in was entirely natural, so the game I’m working on is tentatively titled “Magical Arena.”

I wound up messing around with various card games a bit, notably the new Adventure Time Card Wars game (which is really weird) and the WCW Nitro TCG (which some of my friends got way into because it was cheap, and which is way more clever than anyone would ever suspect), and I still can’t wrap my head around Weiss Schwarz (but there are some broad ideas in it that seem neat). The game that started forming in my head was a weird hybrid of Nitro, the plot system from Shinobigami, and a few other random things, and I’m already barreling towards having a playable prototype. It’ll also involve an Overcharge Deck, which gives you random effects if you try to push yourself too hard in one turn.

I’ve also been getting quite a bit done with Magical Burst proper, and I’ll be posting an update on that soon.