This is an idea I’ve had for some time, though it just coalesced into something I think I can really make work. I’ve been fascinated by magical girl anime for entirely too long, but it’s a genre that cried out to be satirized and subverted. Some might remember how way back when I made a campaign setting called Magical World, a contemporary setting with a dangerous excess of Sailor Moon style magical girls, heavily inspired by the Magical Girl Hunters improfanfic. Later on I had the idea of doing an updated version, titled Magical Burst, which would incorporate Maid RPG style randomness and Superflat insanity, but I didn’t get very far with it. 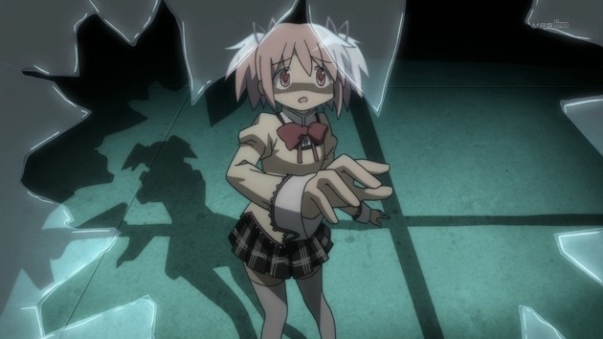 What has me so incredibly inspired is a new anime series called Puella Magi Madoka Magica. It’s a magical girl series from Akiyuki Shinbo, the prolific anime director known for series like Hidamari Sketch, Sayounara Zetsubou-sensei, and many others. (It also doesn’t hurt that the character designs are by Ume Aoki and the music by Yuki Kajiura.) Lyrical Nanoha challenged some of the conventions of magical girl anime–such as by having the protagonist actually sit down and talk to her mother about what she’s doing–but Madoka Magica is the dark magical girl series I’ve been wanting for a long time. It is a series where death is a very real danger, where the desires of adolescent girls are dangerously magnified by magic, and where the forces they’ve aligned themselves with are not so benevolent as they might seem.

Then I stumbled across the TV tropes page on the series, and it turns out that the main writer is Gen Urobuchi. The staff had tried to keep his role a secret as long as they could. Why? Well, in the postface of the first Fate/Zero book he wrote he said, “I am full of hatred towards men’s so-called happiness, and had to push the characters I poured my heart out to create into the abyss of tragedy…” The series is about halfway through its 12-episode run, and it seems like it’s going to get even darker, which is saying something. 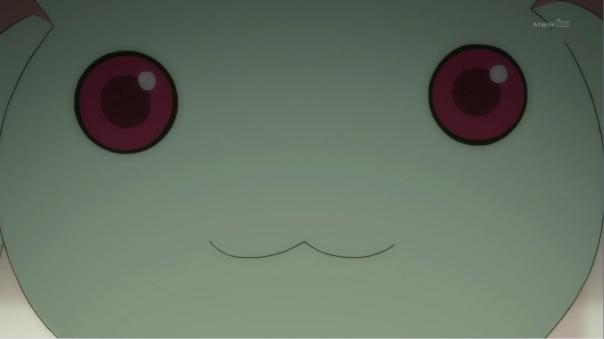 This new attempt at Magical Burst incorporates many of my own ideas–too many for it to be Madoka Magica with the serial numbers filed off–and is meant to be fundamentally a game about fighting youma and the unwanted consequences of doing so. The game is shaping up to be sort of like a magical girl version of Don’t Rest Your Head (“Don’t Rest Your Wand”), though quite a few other elements have made their way into the rules, including a D66 table of random magical mutations.

I think the major thing that has me really wanting to realize this game is that it has the potential to create intense stories that really push characters to their limits, all wrapped up in an anime genre I find fascinating. One of the strengths of the magical girl genre is that it thematically works around a feminine coming of age process, and when you stop sanitizing that in the manner of Sailor Moon and Tokyo Mew Mew you’re quickly reminded that girls can be pretty amazingly vicious. (Of course, that’s half the premise of Panty Explosion.) I also love how Madoka Magica emphasizes the unnaturalness of magic. One thing about Sorcerer that never came across to me until I listened to the Canon Puncture Game Advocates episode about it is that it’s assumed that your PCs have managed to do something that violates the nature of normal reality. While in other settings there’s fertile ground for magic as something well understood, the consequences of exposing magic to a world completely and utterly unprepared for it are fascinating.

Anyway, I just wanted to throw that out there. The actual game should be fairly short and simple, so hopefully it should hold my attention long enough to at least let me finish a full first draft. I’m still digesting Ben Lehman’s (unusually) lengthy essay on playtesting (especially since I barely read it an hour ago), but the main thing I’m taking away from it is I need to be much more rigorous and dedicated than I have been about design.

4 thoughts on “Magical Burst: Getting Started”