So, I finally sat down and read the 移動とエンゲージ (movement and engagement) rules in SRS (F.E.A.R.‘s house system), and it turns out they’re very simple and kind of interesting, so I thought I’d post about them here.

Here’s the diagram that they’ve included to make it a little clearer: 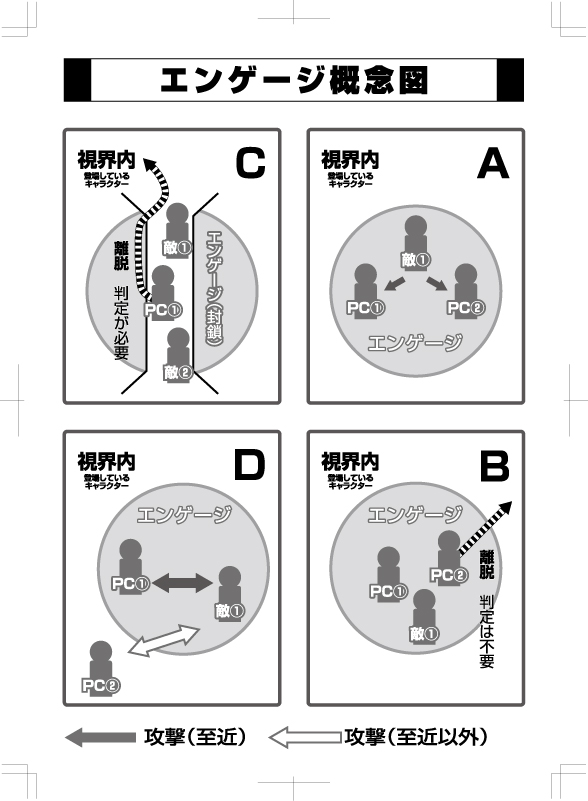 In SRS characters that are within melee range of one another are in an “engagement” (Figure A). If you’re in an engagement with an enemy, you have to take a Withdrawal action (離脱; Figure B), but that takes up a Full Action rather than a Minor Action like normal movement, so you can’t attack during a turn you move out of an engagement. You don’t normally have to make a roll to do a Withdrawal, but if you’re trying to do so through a confined space or in a place where it will otherwise be difficult, you’ll need to make a suitable check (what attribute depends on the particular SRS game, but generally something like Agility). Finally, ranged attacks can indeed go to and from outside of an engagement (Figure D). That’s a quick summary, but I don’t think I’ve really left anything out.

As the diagrams obliquely suggest, some of the books recommend using board game pawns to keep track of movement and engagements. All told it’s a very simple yet intriguing way to make positioning and tactics matter a little more, though I do wonder if they could do a little bit more with it. (That and in Arianrhod the Varna can take a racial skill that lets them do a Withdrawal as a Minor Action, which seems overpowered, though that may be my D&D4e senses talking.)

5 thoughts on “SRS: Movement and Engagement”