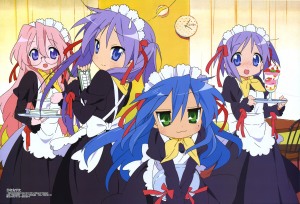 Maid RPG is out in the world, which is exhilarating and terrifying at the same time. My biggest hurdle–getting the actual translation done–is totally out of the way, but there’s still a fair amount of stuff to do. In particular, there are three things I’m working on, with vastly varying degrees of urgency, that will be available for free on the website, and one more thing that Andy is probably going to put together when he has time:

What They’re Saying About Maid RPG
For a while now I’ve been making a hobby of Googling “Maid RPG” to see what comes up, plus checking the trackbacks on this blog entirely too often. Here are some of the things people have said about Maid RPG on the internet.

“What kind of faggotry is this?”
— Anonymous, Who Does Not Forgive

“Being thoroughly disgusted with Maid RPG – then being unable to get it out of my head (or dreams) all weekend”
— Tony Dowler, Who may yet give in at some point

“I think I’d rather not be exposed to that, thanks.”
— The RPG Pundit, whose full quote was more graphic

“But my favorite pick of the con so far is the Maid RPG – The first Japanese tabletop RPG to be translated into English in which you play anime maids competing to gain the Master’s favor all the while sabotaging each other and dealing with bizarro random events? Abso-fricking-lutely hilarious. This is a comedy game that perfectly captures anime tropes. In fact, I defy anyone to play this game and NOT produce a perfect anime story. Tons of fun, playable with no prep, a joy to read (I laughed out loud just about every page), and just well done all around.”
— John Marron, shilling better than I could hope to

“Damnit, Japan.”
— ThePirate, who has underestimated how weird the human race really is

“It’s a Japanese game and you play maids in it. Yeah, totally not for everybody, but as I read through the book last night I couldn’t go a couple of pages without coming across some idea for a game that I wanted to run.”
— Chris Helton, who is enjoying the book even though Jonathan Thompson didn’t get a copy

“Don’t act like you don’t want to be the little girl.”
— Edward, who people don’t seem to like on 4chan for some reason

“Of course we’d all download the pdf instead of paying for it despite your friends efforts.”
“And not because we have low scruples and morals, but because we don’t want to be seen purchasing a book about how to play a game of pretending to be Moe-Moe Maids in public.”
— Anonymous, being a cheapskate

“Ecchi na no wa ikenai to omoimasu!”
— Mahoro, with a helpful reminder

“can i play as a schizophrenic black guy that can summon ufos?”
— Anonymous, missing the point

“Knowing my gaming group, this would quickly descend into ball-gag and dog-collar territory pretty quickly (we’re a twisted bunch of sicko, I won’t candy-coat it), but in the hands of the right kind of people, this could be really fun.”
— Yellow Menace, who may enjoy Maid a little too much

“Holy crap. I just looked at the website for this game, and I think it wins the award for ‘Game I Most Never Want to Play.'”
— Zomben, who knows what he doesn’t want